Its not just someone else's problem..... 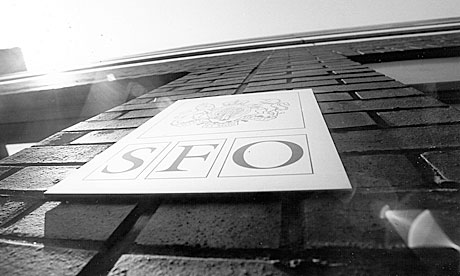 Plans to reform the test for criminal prosecutions could boost the forepower of the Serious Fraud Office to initiate prosecutions.
Banks and other businesses benefiting from fraudulent behaviour will be more likely to join their employees in the dock under proposals being considered by ministers, borrowing from a tough US approach to corporate offending.
Plans to reform the test for criminal prosecutions could trigger a new wave of fines and criminal convictions for businesses and transform the armoury of the Serious Fraud Office, marrying up with new SFO powers to reach financial settlements with companies, known as deferred prosecution agreements(DPAs).
It would also go some way to meeting the Conservative party's pre-election pledge to "strengthen corporate criminal law to ensure companies can be held liable for their actions". That 2010 promise was made in the face of widespread public frustration at the failure of criminal and regulatory authorities to bring companies and individuals to book after the 2008 banking crash.
The latest proposals are yet to win unanimous support in Westminster, with some officials — particularly within the department for business, innovation and skills — understood to be weary of any legislative moves that could be perceived as hostile by the business lobby. In the wake of the Libor-fixing scandal, however, others in government are adamant that the credibility of the authorities policing the markets is vital to safeguarding the integrity of London as an international financial centre.
The SFO is still pursuing its investigation into Libor fixing, having secured additional funding for its inquiries from the Treasury. It has so far charged one bank trader and two money-brokers, and has yet to decide whether to bring charges against banks or other companies.
Prosecutors rarely pursue charges against companies in large fraud cases because the existing law requires that they prove a "directing mind and will" of a company was complicit in the offence. In practice, this typically means they must present evidence that board-level executives were at the centre of a fraud.
SFO director David Green, a strong supporter of reform, said: "The way companies work today, the email chain tends to get rather sparse among very senior managers … But if a [company] has gained from dishonesty, why should it be able to chuck a few mid-ranking people overboard and sail onwards?"
New proposals borrow a criminal liability test which already exists in cases of bribery, under which companies can be prosecuted for "failing to prevent" corrupt payments even if top executives had no immediate involvement in the dishonesty.
But as well as creating this offence, the 2010 Bribery Act also offers businesses the opportunity to defend themselves by demonstrating they had in place "adequate procedures" to prevent corruption.
This test is similar to the powers available to US prosecutors, who assume vicarious corporate liability for fraudulent behaviour on the part of employees. This has armed the Department of Justice with formidable powers to take on some of the largest corporations in the world, often winning financial settlements that allow the company to accept responsibility, pay a fine and then quickly draw a line under the affair.
While proposals under consideration in the UK fall short of the aggressive US approach, critics claim such reform would criminalise what amounts to negligence — a mater not involving dishonesty and ordinarily confined to the civil courts. Green counters: "If that is so, it [corporate criminal liability for fraud] would only be for a very high degree of negligence".
He added: "[Reform] would help promote a better corporate culture in Britain. Poor corporate culture was a contributory factor in the crash."
Jonathan Fisher QC, a barrister specialising in financial crime, has been a long-standing proponent of reform, insisting that DPAs are unlikely to prove an effective tool without a credible threat of corporate prosecution. "If you put yourselves in the shoes of a company, the first thing you are going to ask yourselves in cases like these is: 'What are the chances of conviction'? If it is low, there is little point in engaging in discussions about a settlement."
A spokesman for the Attorney General's office said: "The Government has a range of policies in place in relation to fraud, and all legislation is kept under review." The proposed reform is already supported by shadow attorney general Emily Thornberry.
But the prospect of increased powers to prosecute companies, even where there is no evidence that top executives are involved in dishonesty, is likely to meet with sharp opposition from business lobby groups. They are already unhappy with the 2010 bribery laws and have pressed ministers to review them, the requirement to show businesses have in place "adequate procedures" to prevent corruption amounts to an onerous red tape burden. The are expected to lobby hard against a similar test for corporate fraud.
Posted by JB National Investigations at 11:23 AM